San Gimignano history and origins
WHY BOOK ON THE OFFICIAL WEBSITE? 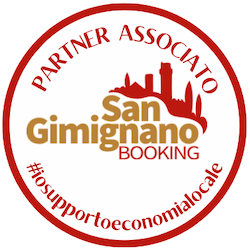 Discover the historic centre of San Gimignano and tower

San Gimignano history… From the Etruscans, to the Romans, to Medieval splendor

The history of San Gimignano has distant roots that reach back to the ancient Romans. In 63 BC, two young Roman patrician brothers; Muzio and Silvio, fled to the “Valdelsa,” valley of the Elsa River, after their involvement in the conspiracy against Catiline. They built two castles; the Mucchio that of Silvia, the latter being the first structure of present day San Gimignano.

San Gimignano is named after the Bishop of Modena who lived in the fifth century BC and later became a saint for having miraculously appeared during the invasion of Attila the Barbarian, and saved the city from destruction.

In San Gimignano there are numerous prehistoric remains while in the surrounding countryside there are traces of ancient Etruscan settlements and sacred sites, such as the one found at Pugiano, while the Roman presence in the area can be detected near the Fosci River at the Villa di Chiusi.

San Gimignano began to develop in the Middle Ages when it became a major resting place for pilgrims walking the Via Francigena road, built by the Lombards and the obligatory pilgrimage route when heading from France to Rome.

The city remained independent until 1354, during a time of pestilence and misery, when it came under the control of the Florentine republic. Later, in the seventeenth century, it became part of the Medici Grand Duchy.

The historic center of San Gimignano: towers and medieval buildings

San Gimignano is situated on a hill 334 meters high and is surrounded by 13 towers.

It is said that in 1300 there were 72 towers; one for each family of the wealthy city, whom through the construction of a tower showed their economic power.

During the Middle Ages the tower was a symbol of power since the complex construction was done at a considerable cost and could be afforded by only the most influential families who were often involved in trading activities.

After the towers came the construction of lower residential buildings called ‘palazzi’ which were generall y made of brick.

These changes have resulted in the characteristic architectural features of cities like Florence, Pisa, Lucca, Siena.San Gimignano, however, rather than having it’s own unique architectural identity has a fusion of styles influenced by a variety of outside sources.

San Gimignano continues to develop until 1300 when the city comes under the domination of Florence and plagues decimate the population, reducing it from 13,000 to only 3,000 inhabitants.
Gradually, a more modest and functional type of urban growth develops in the city alongside the imposing palaces and towers.

San Gimignano is now a city under UNESCO protection.

Continue Reading
from $169.00/night
The Dante Rooms are the most noble and prestigious accommodations available at the Hotel l'Antico Pozzo
These high-ceiling, spacious rooms, many with frescoes, are furnished in period furniture and are designed for our trademark comfort to make your experience with us full of comfort, wonder and charm....
Rich buffet breakfast
Wi-fi internet 24/24
BOOK NOW

Continue Reading
from $109.00/night
The discreet elegance and great attention to detail defines the unmistakable style of these rooms, where fine art combines with quality and comfort to make your stay an intimate and unforgettable experience...
Rich buffet breakfast
Wi-fi internet
BOOK NOW

Continue Reading
from $89.00/night
Love is precisely what makes a holiday special at the Hotel l'Antico Pozzo. The Boccaccio Rooms are smaller in size with comfort in keeping with the fundamental l'Antico Pozzo style. They are perfectly suited for a budget travel without sacrificing the quality and full service of modern hotel...
Rich buffet breakfast
Wi-fi internet
BOOK NOW
Contattaci su WhatsApp
Invia con WhatsApp